Hello. I'm Evonne Wareham and I write romantic thrillers and romantic comedy, with a touch of crime, for award winning UK independent publishers, Choc-lit. Writing in the sunshine and in the shadows.

I like to think that I write books that are exciting, romantic and glamorous - a shot of escapism when the world looks drab and grey. They are also sometimes a bit scary.
After a career in local government in London, I’m now back in my home town, on the coast of South Wales, living near the beach. I like to write about memorable locations, so both big cities and beaches feature in my books. Also sunshine, food, art, architecture, gardens, pretty clothes, shoes, very nasty villains, heroes with a dark past and independent heroines who find themselves in difficult and sometimes dangerous situations. And, of course, they’re love stories. They always have a happy ending.

Evonne with the awards for the Oklahoma National Readers’ Choice Award and the Colorado Romance Writers’ Award.

Her second romantic suspense novel Out of Sight Out of Mind, was a finalist for the Maggie Award for Excellence, presented by the Georgia Romance Writers’ Chapter of the Romance Writers’ of America. Both novels were also finalists, as unpublished manuscripts, in the American Title contest. 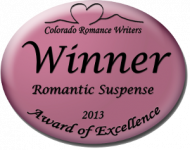 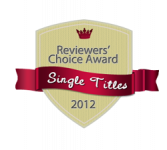 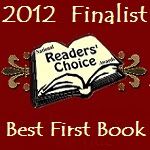 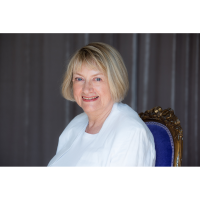 Get in Touch With Evonne